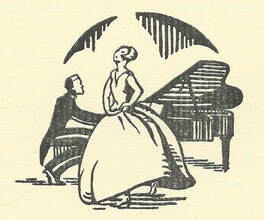 When Arthur Eaglefield Hull founded the British Music Society in 1918 (to which the newly-formed Huddersfield Music Club was affiliated) one of its aims was: ‘…to champion the cause of British performers at home …’1 and today it is still one of the considerations when selecting programmes and artistes. Over the century a number of internationally renowned musicians, from Huddersfield, have been engaged by the Society.

It is probable that Olga Haley is not a familiar name to current Music Society audiences, yet in her time she was a celebrated contralto whose performances included chamber music at the Aeolian Hall, Promenade concerts with Sir Henry Wood, Gerontious under Elgar and broadcasts from the Free Trade Hall with Sir Hamilton Harty.  Olga Haley was born on 10th November 1895 in Huddersfield, to Edward and Sarah Ellen ‘Nellie’, both practising musicians. On the 1901 census they were recorded as living at 21, Portland Street, Huddersfield. She was taught piano by her mother, who had attended the RCM and singing by her father who described himself as a ‘vocalist’ and ‘instrument maker’. Olga attended Bradford Girls’ Grammar School, then the Royal College of Music, attaining ARCM in 1916. She made her début later that year and her professional career quickly took off.

She sang twice for the (then) Music Club: in February 1921 and February 1924, on both occasions accompanied by her mother. The first recital was an extensive programme ranging from Schubert, Debussy, and Rachmaninov to Holbrooke, Boughton and Lyapunov. The second concert was organised under headings: Folk Songs, Hebridean Songs, Contemporary Songs and Classical Songs. Both were substantial programmes of about twenty pieces each. Committee minutes from 1923 record that she was to be paid 30 guineas (in the same minutes, the prestigious Flonzaley Quartet were to be paid 50 guineas, or 60 ‘if necessary’).
She married twice, the second time in 1945 to Maurice Wood, a week after her first husband John Hinchcliffe died; as she wasn’t mentioned in his will, it might be surmised that the marriage had broken down irretrievably. She went to live in Devon and retired from singing. She died on 26th March 1989 in Wonford, Devon.
If the surname Haley isn’t familiar, perhaps her grandfather’s connections might be: he founded Wood’s music shops, which in their time were a vital resource and great asset to most musicians in the Huddersfield and Bradford areas. 2

Born in Huddersfield in 1891, Haydn Sandwell was a talented and respected musician. His organ teacher was Arthur Eaglefield Hull and under his tutelage he attained his FRCO at the age of 17, the youngest ever at that time. He was a chorister at the Parish Church and soon was appointed Dr Hull’s deputy organist. He then became organist at Lindley Parish Church and in 1919 followed Dr Hull as music master at Almondbury Grammar School, a position he maintained until his untimely death in 1930.  He also enjoyed accompanying ‘lighter’ music, playing at the Rhyl and Llandudno Pier Pavilion and during the First World War contributing to concert parties to entertain the troops. At Almondbury Grammar School he directed Savoy operas. 3  He was a regular accompanist at Music Club concerts: in 1919 he accompanied the tenor Gervase Elwes in a broad-ranging programme including Ireland, Bridge and Quilter; in 1929 Marjorie Ffrangçon-Davies gave a recital of Wolf and Delius, in a concert that also included Harriet Cohen playing de Falla, Chopin and Bax.

During the war years the Ladies’ Committee assumed the task of organising the concerts. The Hallé Orchestra, conducted by Laurance Turner took on a large share of the concerts; this is possibly no coincidence as he was a resident of Huddersfield. Between October 1941 and March 1943 he conducted seven times, including Clifford Curzon playing Beethoven’s Piano Concerto No 4, and Isabelle Baillie singing songs by Hamilton Harty and Richard Strauss. He had been leader of the Hallé, taught violin at the Royal Manchester College of Music (which later became the RNCM), and also at Huddersfield Polytechnic, now the University. 4

Keith Swallow studied at the Royal Manchester College of Music where he was awarded prizes and diplomas; he also holds a M.Mus from the Royal College of Music.  He must be one of the Music Society’s most versatile and prolific accompanists having appeared eight times, between 1959 and 1983. His first concert was with the Turner String Quartet (leader Laurance Turner) when he joined them to play the Schumann Piano Quintet, Op 44. Since then he has accompanied the violinist Maureen Smith, the daughter of Eta Cohen, (a name that will resonate with anyone who has been a student of the violin); Caroline Crawshaw, soprano; Leon Goossens, the virtuoso oboist; and on a number of occasions, the clarinettist Janet Hilton. In November 1983 they were the first artistes to play for the Society at St Paul’s Hall with a programme that included the Brahms Clarinet Sonata Op 120 No 2; the Poulenc Clarinet Sonata and Finzi’s Five Bagatelles.

No doubt in future years other talented local artists will emerge who will have sufficient musical expertise to take up a professional performance career. Their names are yet unknown but one day some of the artists emanating from the Huddersfield area could be recognised, not just locally, but nationally and internationally, following in the footsteps of their notable predecessors.