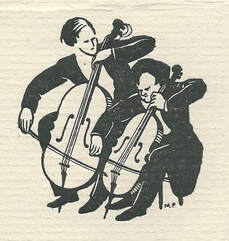 In the course of one hundred years it could be reasonably assumed that documents passed down could be misplaced and that as key people leave committees some items are lost. It is amazing therefore that the Music Society has attained an archive of minutes and programmes that is almost complete. It would seem that, even from the outset, people realised that this society was, and would in all possibility continue to be, important for many years into the future.

For most people the main reason for buying a programme is to see the pieces that are to be played, and to read the analytical notes about those pieces. Dr Hull, the founder, wrote the notes for the first ten seasons; they were erudite but probably accessible to most of the audience, a standard maintained throughout the century. After his death the task was taken on by committee member Haydn Sandwell, his deputy organist at Huddersfield Parish Church and a teacher at Almondbury Grammar School. By 1953 Alison Shaw was writing the notes, followed by Marjorie Glendinning and latterly Christine Stanton.

Programme covers reveal much about a society and its history. Those from the first season are varied and interesting. The very first, for a recital by the Russian singer Vladimir Rosing, was printed in London and makes no mention of the venue. The second however is headed Huddersfield Music Club and has ‘1st season 1918 – 19’ printed at the top. As Rosing had performed the same recital eighteen days earlier at the Aeolian Hall in London it is quite possible that this was a generic programme produced for all his concerts.1   By the time of the second concert the Music Club was beginning to form an individual identity and produce its own programmes which were printed in Huddersfield.

A definite style did eventually begin to emerge: the fonts and layout were regular with the committee listed on the front cover. Very few illustrations were used, and only rarely examples of the music. However, in April 1926, the committee offered a prize of twenty-one shillings for a logo to be designed, competed for by the students at the Technical Art School. There were five entrants; the committee voted that the first prize should be awarded to Margery Park and the second to Ruth Armitage (see top). The two designs were used on most of the programmes in the subsequent seasons. In 1928 a similar competition was held and two more designs were adopted (see below). Although attractive and in a contemporary style,
all four designs depicted combinations of musicians rarely featured in chamber concerts or were not relevant to the participating artists. Nevertheless, these designs were used consistently until the 1960s when it was felt that a new ‘emblem’ was desirable. During a committee discussion W.E. (Ted) Thompson, committee member and general surgeon at the hospital, produced some designs of his own and by 1970 that logo was produced, and is still in use today. Thankfully, his illustration features a variety of instruments featured in many of our concerts.

Over the years much discussion has taken place about programme prices, printing costs and size. The programmes for the first season cost threepence, apart from the one for Myra Hess which was larger, and cost sixpence. In the following season Rosing’s second programme cost a shilling, but that might have been London prices! From the 1920s to the 1940s they were priced at either threepence or sixpence dependent on size and content. In 1922 they were sold at cost, but by 1925 the accounts show that they made a profit of about twelve pounds (the subscription rate for the season was twenty-five shillings – just over a pound). In 1960 however, the printing was making a loss and it was resolved to use a ‘cyclostyled’ form; various members of the committee volunteered to undertake the production of these. By both previous and today’s standard they look very amateurish, produced on a typewriter and using poor quality paper. They did however remain in production until the 1990s when more efficient printers and computers were available.

Inevitably WW2 had an influence on all aspects of life, not least the Music Club and the published programmes. The government restricted the use of paper, thus the 1939 - 40 season was printed on one side of thin, small sheets, very unlike the thick, larger copies of the previous season. Commensurately the price dropped to twopence. At the outbreak of war the committee resolved that all engagements should be cancelled. However, the Ladies’ Committee did organise a full series of concerts throughout the war years. Some programme covers reveal that artists were unavailable due to war service or in the case of William Pleeth’s appearance ‘by kind permission of Brigadier Wheeler’.

Many programmes state the brand names of pianos on the front cover: Steinway, Playel, Chappell, Bechstein, Blüthner, Grotrian-Steinweg and Bösendorfer are all mentioned, apparently as part of the sponsorship deal made when hiring the piano.

In 1947 the committee was concerned that ‘subscribers refrained from buying programmes because the lights in the hall are lowered during the actual recitals’. At the next meeting the committee reluctantly agreed to keep the lights on during the concert as they felt that the majority of the subscribers would prefer it that way and wanted to be able to refer to their programme notes; this still seems to be the consensus view of our audience members at the present time.

The programmes reveal that the society has used a number of different venues during the last hundred years. The first season was held in the Freemasons’ Hall in Fitzwilliam Street, it then moved to the Highfield Hall, followed by St Patrick’s, Gledholt Hall, the Mayor’s Reception Room at the Town Hall and Venn Street Arts Centre, before moving to St Paul’s in 1983.

The day of the week on which concerts are held has changed a number of times over the years. Initially it was on Wednesday evenings, changing to Saturday afternoons during the war. In 1952 the venue changed to the Mayor’s Reception Room and if you’ve ever wondered why the concerts are currently on a Monday, it is because that was the only evening that was regularly available at the Town Hall.